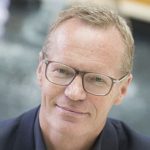 In this role, he is responsible for sales and services, growth and customer-centric innovation in 28 countries. He is also Executive Sponsor and spokesperson for Digitization on Cisco’s EMEAR leadership team as well as for Cisco Smart Citiy initiatives in Hamburg.

With more than 20 years of leadership experience in the IT industry, Ganser has a deep understanding of market transitions and business transformation as well as their impact on society. As countries, cities, and companies are digitizing at exponential speed, it is crucial for all organizations to reinvent themselves. Customer-centric innovation through technology is therefore a primary focus for Ganser. He is actively engaged in innovation projects including hackathons and rapid prototyping and is one of the initiators of the Global Center for Digital Business Transformation, a joint think tank between Cisco and IMD in Lausanne.

Talent development and a collaborative environment are another priority for Ganser. He regularly mentors prospective leaders from around the world and is an ambassador for diverse teams. Cisco organizations in Austria, Czech Republic, Germany, Hungary, Poland, Switzerland and others have been awarded as great places to work under his leadership.

Michael Ganser is regularly invited to speak at European and Global IT and business conferences about digitization and digital disruption in verticals such as the public sector, manufacturing and healthcare.