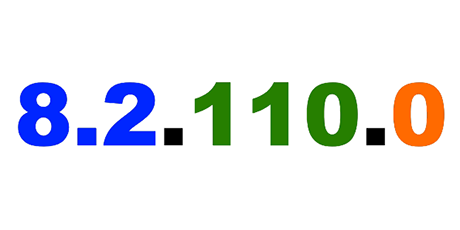 I regularly get questions with regards to AireOS-Software Releases and in this little blog-entry I would like shed some light on this topic.

As example I will use one of the latest Software-Releases that we have published to www.cisco.com – AireOS 8.2.110.0

First let’s have a look at the number of this AireOS-Release:

Some people will immediately recognize that this number is representing the first Maintenance-Release of the the 8.2-Software-Train.
But how would you determine that?

To explain, let me split this number in 3 elements:

I’ve used different colors to make it a bit easier to differentiate the different parts.

The first element consists of the first two numbers (in blue) and defines the Software-Train – in this case, the 8.2-Train.

One typical question in this area is, what triggers a change in this very first element.
Or to say it a bit more practical: What’s the deciding factor, that a release is called “8.2” and not for example “9.0”?

There are several aspects that are considered, when the Train-Number of a release gets defined.
If we take a simplified look at this, it comes down to a Marketing-Decision of the Product Managers.

The second element is the third number (in green).
Since the 7.x releases this number has been following certain rules

Rule 1:
The first release candidate that is pushed to “cisco.com” will always get the number “.100”

Rule 2:
Each Maintenance-Release-Candidate will then get ten more added to the previous candidate number.

Rule 3:
If there are some bugs or problems recognized and a rebuild is published, those specific release numbers will be incremented.
Typically these releases will have additional critical bug-fixes included.

In all cases, I would highly recommend reading the Release-Notes carefully.
Take care especially about supported Hardware, open and fixed caveats, etc.

The last element and the forth number (in red) is what’s called an “Interim-Build”.

AireOS-Releases published on “cisco.com” will always have an “Interim-Build” equal to “0”.
If the Software running on your WLC shows anything other than a “0” in this position, you are running a special release.

These special releases are exclusively published by Cisco TAC and should only be used based on the recommendation of TAC.
Usually TAC distributes them to solve critical bugs before the next official MR is being released.

If they have been published by TAC there is also no problem related with running such an image – TAC will fully support you on this SW-Release.
Of course, with availability of official MRs solving the same bug, it’s recommended to move to that official MR.

So I hope, this clarified a bit, how to read AireOS-Numbers.