Kangaroo Farts and the Teachable Moment 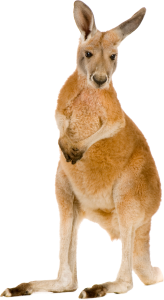 Not only are they cute, but marsupials like kangaroos produce eco-friendly farts that intrigue scientists battling climate change.

As any adult who’s ever tried to hold the attention of a group of children knows, nothing can derail focus faster than a fart. One minute you’re discussing geography, and the next, it’s all about the groans and giggles.

When you’re connecting with students, you learn to roll with the olfactory punches, as it were. So, when the gas obviously passed in a Nunavut classroom during a recent Cisco Connected North telepresence session with the Ontario Science Centre, Educator Russell Zeid jumped on the chance to turn it into a teachable moment.

“Did someone fart? Does it smell really bad?” he asked a screen-full of laughing students when it became clear they were no longer thinking about materials science and the physics of structures. “Did you know that kangaroos don’t fart like we do?” he added. Apparently kangaroo farts smell like a particularly gross combo of old cheese and vinegar, but contain relatively little methane, making them much more eco-friendly than cow or sheep farts. 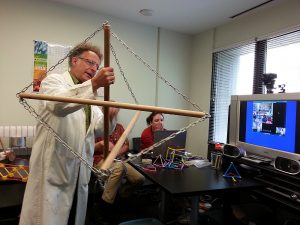 A recent study by Australian microbiologists showed that ‘roo gut bacteria—including Blautia coccoides and types of Prevotella, Oscillibacte and Streptococcu—help the marsupials metabolize carbon dioxide and hydrogen by producing more acetate than methane, unlike most livestock. Harnessing the power of those bacteria could be another step in managing climate change.

While the kids learned about kangaroos, we learned a lot, too. This was the Science Centre’s first foray into the Connected North initiative, thanks to our new partnership with Cisco. We learned that there are sometimes language barriers with kids in Canada’s north, so we’ll have to slow down next time and not try to pack so much into 45 minutes. We learned that it costs a fortune to ship materials to Nunavut, and Cisco staff are genius at getting pipe cleaners, pop cans, plastic straws and other stuff we take for granted down here, up there. We learned that through the techno-magic of telepresence, we can not only share our love of science, but forge relationships as well. 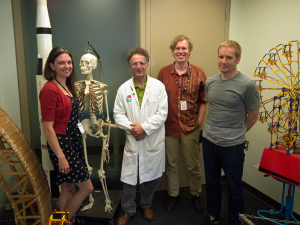 The kids were particularly curious about the skeleton at the back of the presentation room (bones are subject to tension and compression, after all) and wanted to see more of “where we were”, so next time we’ll give them a better sense of the Science Centre through video and photos.

We’re excited to try this again—the Cisco technology allows us to reach beyond the walls of our physical building here in Toronto and make connections with young people that will help them get excited about science and understand how it plays a role in pretty much everything around them. Including the smelly bits!

Got some great ideas for ways in which technology can help spread science engagement and literacy? Give me a shout @CISCOmuse or sabrina.greupner@osc.on.ca