Behind the TO2015 Games: Creating the Most Digital Games in History

This post is last in a series taking readers behind-the-scenes of how Cisco technology is powering the TORONTO 2015 Pan Am/Parapan Am Games.

During these series we’ve taken you deep inside the technology powering the TO2015 Games, which ended this weekend with an incredible closing ceremony that Canadians will remember for years to come.

Our goal was to make these the most digital Games in history. I’m proud to say we did just that. Let’s look at the facts and figures.

TO2015 Technology by the Numbers

The Ethernet and dark fibre cable required to connect the Games and all the venues was longer than 232 CN Towers laid end-to-end.

More than 18,000 wired LAN ports and 2,000 wireless access points were installed across Games venues, ensuring spectators, officials and athletes had access to information when they needed it.

The Cisco network provided more than 2.4 million hours of free Wifi throughout the Games. To put that into perspective, that’s equivalent to 274 years of continuous wireless access.

Over 38,000 pictures were taken through our Interactive Experience Kiosks and Cisco Countdown clock during the Games.

An estimated 42,000 people in venues across the Greater Toronto Area were greeted and had questions answered by fantastic TORONTO2015 volunteers live over Cisco TelePresence. 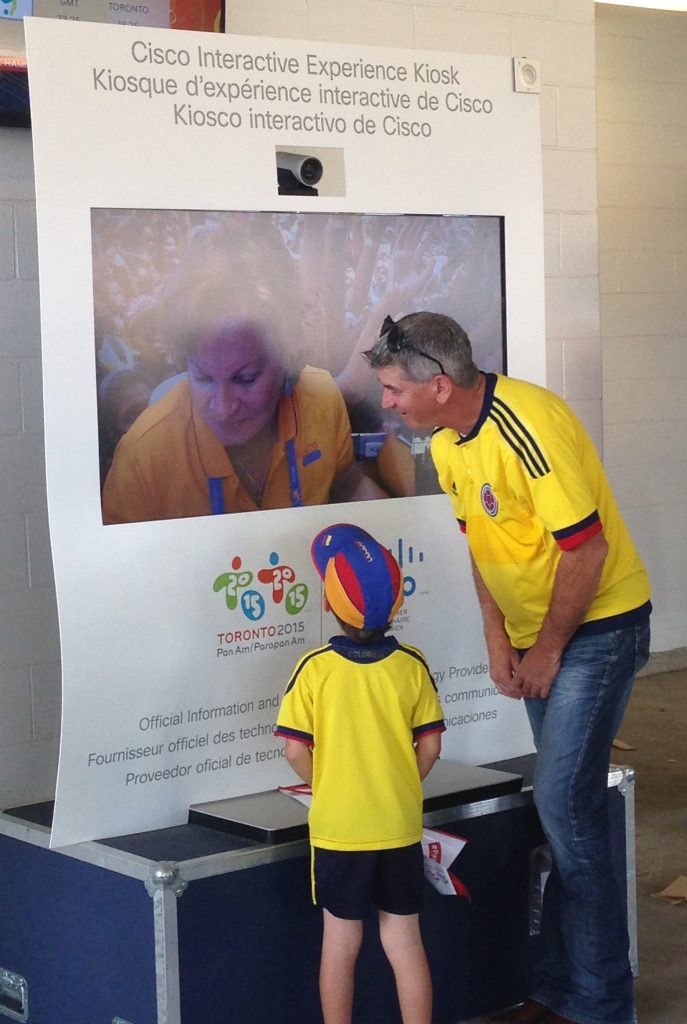 Colombia fans speak with a TO2015 volunteer through Cisco TelePresence before the women’s Gold-medal soccer game.

These Games were a tremendous success for the GTA and our athletes, and we are more proud than ever to be involved.  As our attention turns to the Parapan Am Games, beginning on August 7th, stay tuned for more on the technology legacy of these Games.

Do you have a memorable moment from the TO2015 Games this month? Share it below or on Twitter using the hashtag #CiscoTO2015.

To read the previous parts in this series, click on one of the links below

Behind the TO2015 Games: How Cisco is Powering the TORONTO 2015 Pan Am/Parapan Am Games

Behind the TO2015 Games: Cisco I CAN Learn STEM & I CAN Develop Programs

Behind the TO2015 Games: Cisco TelePresence Powers Virtual Help Desk

Behind the TO2015 Games: Cisco Connected Healthcare Mobile Clinic

Behind the TO2015 Games: Facilitating Remote Media Interviews with Cisco TelePresence