Mobile VNI Forecast Report: Wi-Fi and Video will be Big Players in the Next Five Years

On February 3 we released the Cisco Visual Networking Index Global Mobile Data Traffic Forecast for 2014 to 2019.

According to the annual forecast report, some key contributors to significant mobile traffic growth include: 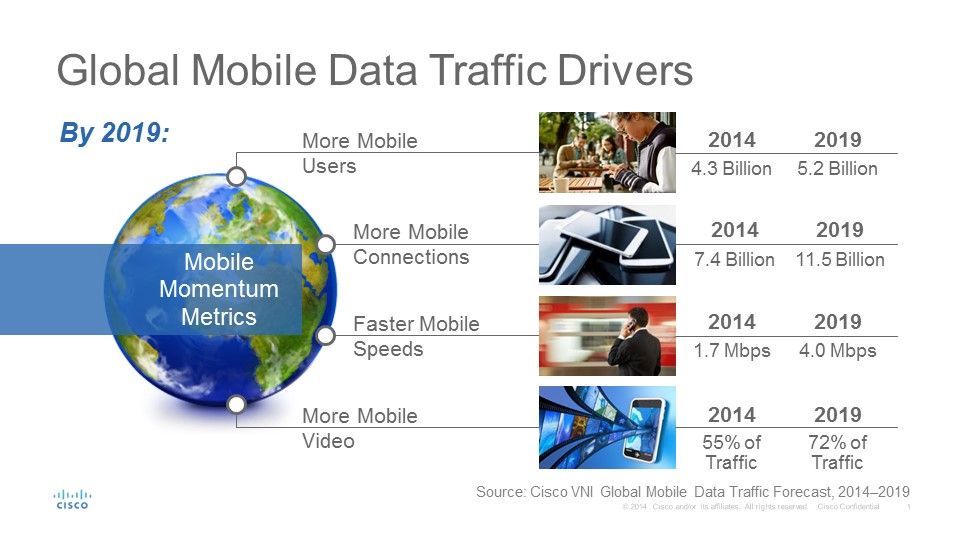 Since there’s so much data that we could talk about, I’ll first highlight some of the key findings globally and then move onto numbers specific to Canada. It’s sufficient to say that Wi-Fi and video will be big players in the next five years.

Looking at the big picture, global mobile traffic will reach an annual run rate of 292 exabytes by 2019, up from 30 exabytes in 2014. This is comparable to 65 trillion images sent (e.g., via multimedia message service or shared on Instagram) annually. That’s the equivalent of every human being on earth sharing 23 images, every day, for a year.

There are a few figures that I found interesting in this report and they may interest you as well. The first is that Wi-Fi offload traffic will surpass cellular traffic. “Offload” refers to traffic from dual mode devices that support cell and Wi-Fi connectivity (excluding laptops). In 2014, 46 per cent of total mobile data traffic was offloaded; by 2019 this number will increase to 54 per cent.

Secondly, by 2019 Voice-over-Wi-Fi will surpass Voice-over-LTE. It will account for more than half—53 per cent—of all mobility IP voice traffic. It’s not that Voice-over-Wi-Fi is new, but earlier solutions had limitations that affected adoption and end-user experiences.

Lastly, by 2019 video will represent 72 per cent of total mobile data traffic, compared to 55 per cent in 2014. I hope your network is ready for it.

Now let’s take a look at the Canadian data. In Canada, by 2019 79 per cent of the population will be mobile users; this is up from 72 per cent in 2014 and 69 per cent in 2013. This is a significant increase that shows a large number of Canadians will become more connected.

Lastly, in 2019 54 per cent of IP traffic will be Wi-Fi, 41 per cent will be wired and five per cent will be mobile. As we saw in the global data, Wi-Fi will dominate mobile data traffic in Canada as well.

All of this is to be expected as technology rapidly advances. You can download the full report here and view the Canadian results here.