As I’ve shown in my past blogs, Canada’s oil and gas sector has seen much innovation, but operators have also faced many challenges. For example, gas prices were at seven-year lows just a year ago and oil prices plummeted in the second half of 2014. Operators are scrambling to re-plan for 2015. Consider that in the span of 6 months global oil prices have fallen 45%, the majority of which goes directly to the bottom line. 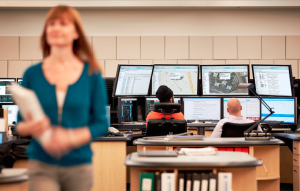 We are entering a tipping point in the market, and historically it forces the industry to change.  Mergers and acquisitions, consolidation and cost cutting are always a byproduct of a downturn, and these times often accelerate the need for innovation and change. This pressure to reduce costs can become a strong driver for technology adoption.  The key is to position solutions that drive efficiencies and reduce cost. Cisco’s collaboration, cloud computing and Unified Computing System (UCS) technologies can all be aligned to reduce operating costs.  It may look to many observers of the oil and gas industry that the floor just fell away, but it is actually a great time to build a better, more cost-effective foundation.

Here’s my take on where the oil and gas industry is heading in 2015.

“When in doubt don’t.” Operators will be very conservative with regard to any spending decisions beyond existing production commitments.

For the last five years the Canadian oil and gas industry has dealt with uncertainty. Delays on pipeline expansion have been hampering the industry and the resulting transportation crunch has forced Canadian supplies to receive a significant discount on heavy oil. And more recently, poor commodity prices recently haven’t helped the situation.

But it hasn’t been all bad.

Starting in mid-2012, significant new rail capacity began to enter the market and new heavy oil rail capacity out of Canada is expected to reach 800 thousand barrels a day (mbbl/d) by early 2015, up from about 150 mbbl/d in mid-2013.

Even without the go-ahead for the Keystone pipeline, new pipeline capacity is expected to add close to 1.1MBbl/d by Q2 2015. With all of this new capacity, demand still outstrips available supply so there is still limited downside risk from lack of demand. The differential that resulted from lack of transportation capacity is decreasing and will result in more market certainty, and higher relative prices or Canadian heavy oil.

Although there is still uncertainty with regard to the long-term gas prices and the Canadian dollar, most analysts have these holding at current levels for the next 12-18 months. Assuming no significant change, operators should begin to consider more capital investment in unconventional gas.

And then there are the oil sands, and a $6B elephant that showed up in the past 6 months.

During the summer of 2014 the daily price for Canadian bitumen produced from the oil sands fell as global oil prices declined below USD$60 per barrel. If current prices remain, oil sands operators could see as much as $~6 billion eroded from their revenues in the second half of 2014 alone.

Looking forward to 2015, many companies will take a wait and see approach until there is more certainty around oil prices. A continuation of Western Canadian Select (WCS) oil prices below $60 per barrel into mid-2015 will have a strong downside effect on oil sand operator’s indirect spend, and budgets like IT are generally the first to be impacted.

The industry will be at a crossroads by the end of the first quarter of 2015, as 2014 hedged contracts come to an end.

How will this affect Alberta and the rest of Canada in 2015?

That is what operators, service companies and any company or individual that relies on a strong and growing oil and gas industry in Canada is asking. The answer is … it depends. Operators in the near term have somewhat of a buffer, but executives will soon have to determine if they are going to downward adjust for the decrease in price.

For Canada? When the oil and gas industry coughs, the Canadian economy catches a cold!

So what does all of this have to do with Cisco?

As always, these predictions need to be tempered with a number of factors that could impact the outlook: specifically labour shortages driving up costs in the oil sands, uncertainty with regulatory approvals and tax structures for investment in BC natural gas, regulatory changes for railroad transportation of oil in North America, and changes to the global and regional economies. But there’s also another factor that needs to be considered: technology.

Consider this. You are employed by an oil and gas company, dealing with all the challenges I’ve outlined above for 2015. Your company wants to invest strategically in projects that will improve how you operate while lowering costs. What’s the answer? Technology. Specifically the Internet of Things (IoT) and the ability to monitor, communicate with and automate your operations.

For companies in 2015, it’s simple. The more we can help our customers adopt IoT solutions, to drive down costs and increase productivity, the more they can insulate themselves from the uncertainty commodity prices create.