The Results Are In: Cloud Traffic Will Quadruple in Four Years

This week Cisco released its fourth annual Global Cloud Index, covering 2013 – 2018. We provide the study as an industry resource to IT professionals but its results have implications for just about everyone. 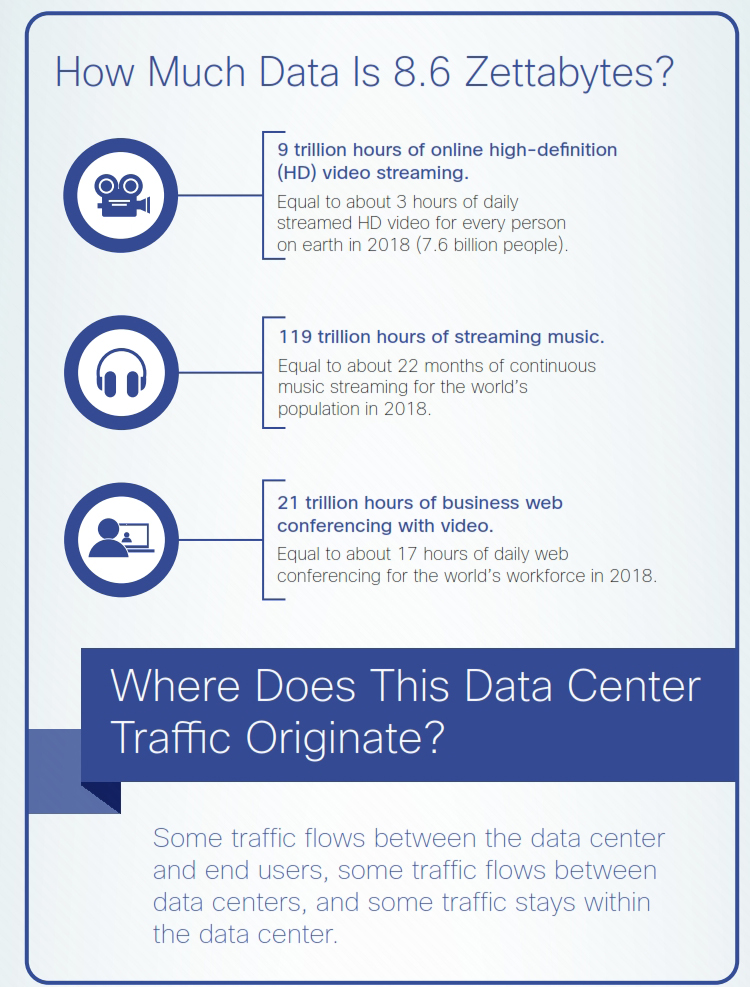 What’s fascinating about this year’s release is how staggeringly large the numbers are. The results are in, and they show that between 2013 and 2018 cloud traffic will quadruple! Specifically, we’re predicting by 2018 global IP traffic will reach 715 exabytes per month and 8.6 zettabytes annually.

What’s exactly is a zettabyte? Glad you asked! It’s a trillion gigabytes.

Now that number might be a little difficult to digest, so to put things in perspective, 8.6 zettabytes is roughly equal to 9 trillion hours of online HD video streaming.

Based on global population predictions for 2018, that’s about 3 hours of daily HD video streamed for every single person on earth!

Not only are these numbers simply massive, they represent a combined annual growth rate of 23%. In fact, global cloud traffic is actually growing faster than overall global data centre traffic. In 2013, cloud accounted for 54% of total data centre traffic and by 2018 we expect it will be 76% of the total.

Cloud is becoming such an integral part of our daily lives both at work and at home, but high-bandwidth consumer services account for much more traffic than business use. This year’s Global Cloud Index indicates that by 2018 business cloud traffic will only represent 34% of global cloud data centre traffic, down from 41% in 2013. Conversely, consumer cloud traffic which includes high definition movie and music streaming services like Netflix and Spotify, represented 59% of cloud data centre traffic in 2013 and is expected to grow to 66% of the total by 2018.

So what does this mean for Canada? Well, for starters it means that not only are we going to need better infrastructure to move our data but we also need to be prepared to secure, and store, it as well. And it also means that our businesses need to adjust to the future of IT, where most applications and data will operate from and travel between clouds, rather than on-premise.  In short, it’s time to prepare your networks now for the reality of tomorrow.

One last thought. While Canada does not find itself among the country leaders in either fixed or mobile network performance for 2014, continent-wide, North America had the most cloud workloads (30.5 million or 54% of the global cloud workloads) and is forecast to continue as the leader, with that number growing to 69.3 million workloads by 2018.

To read more about the Global Cloud Index, use our GCI Highlights Tool to see forecasts by region, read the GCI Whitepaper or view the infographic.

Will your business be ready for future cloud workloads? Leave a comment below.