ICF 2014: And the Winner Is…(Hint: Another Cisco Partner) 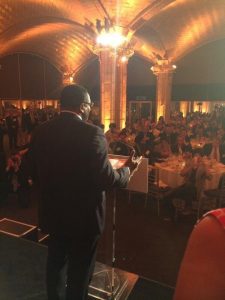 Toronto Councillor Michael Thompson — a great and longtime supporter of the Smart City movement in Toronto — accepts the Intelligent Community of the Year award in NYC at the ICF Summit.

The list of #ICFtop7 included three Canadian Cities: Winnipeg, Toronto, and Kingston. All of them (including two from the US and two from Taiwan) were recognized for the environment they have created in their communities that addresses engagement, growth and innovation (among many more intelligent community requirements and characteristics). It goes without saying that Cisco is a proud supporter and partner of all three Canadian Cities. Technology, innovation, and collaboration has risen to the top of their priorities as they try to position themselves competitively in an ever-changing, and connected world.

The honor of the 2014 Intelligent Community of the Year award was bestowed upon … Toronto!

The City of Toronto is no stranger to the Intelligent Community movement. For more than 15 years already, the City has embarked on a very prestigious urban redevelopment project: Waterfront Toronto. This large brown field was, and is, a greenfield for building the blueprint of a hyper-connected and intelligent community. It’s also home to some of the most intelligent buildings, including the Corus headquarters, George Brown College Waterfront Campus and the TORONTO 2015 Pan Am/Parapan Am Games Villages. But the City’s intelligent projects go beyond the Waterfront and spread throughout the community.

From the incredible work done by the digital media and entertainment sector; the start-up culture created by organizations like Mars Discovery District, Ryerson DMZ, and Richmond 111 (just to name a few); the celebration of Toronto’s heritage on sites like Evergreen Brickworks; the world-class research and development that is happening in some of the best educational institutions in the world; the innovation that is taking place in Toronto’s hospitals and health sector; and on and on.

Toronto shows an amazing tapestry of technology, innovation, and collaboration that is driving economic opportunity, growth, and cultural excellence (and so much more) to all its citizens and businesses. It is a true intelligent community (with technology as the great enabler, of course). We know that this is merely the foundation of so many more smart and connected projects and programs to come (for more on this, just keep following my blogs).

Cisco Canada is a great supporter of the Toronto Smart Community movement. Our investments and partnerships go deep and wide–including our premier partnership with the TORONTO 2015 Pan Am/Parapan Am Games and Maple Leafs Sports and Entertainment; the connectivity in Waterfront Toronto; the network and collaboration partner of choice for many of the City’s departments; the work with Metrolinx, Union Station as well as Pearson International Airport for the transformation of the City’s transit system; the development of some of the world’s most intelligent buildings; our deeply rooted partnership with some of the largest educational institutions; and a $100 million investment in an IoE (Internet of Everything) Innovation Center (one of four worldwide) and new Canadian Headquarters. And there is so much more to come.

Now, there are no losers in this race. I also want to congratulate the Cities of Winnipeg and Kingston for their respective accomplishments. They too have started a Smart City movement and are both already seeing incredible positive results for their community. We look forward to our continued collaboration with them–and all Canadian communities–as they advance the use of innovation and technology to move their Cities forward.

In closing, I would like to draw your attention to a Smart City class from Harvard GSD Executive Education. Attending this class does not guarantee you a nomination or award with the Intelligent Communities Forum. But it will help get your teams started with the Smart City journey….because a journey it is.