The People’s Choice Award goes to…

Four first-year students in Sheridan College’s Interaction Design program were chosen as the winners of the People’s Choice Award for the Presidents’  Innovation Challenge.

The team, going by the name Work in Progress, consists of Ali Tayyebi, Riley Co, Deron Li and Kaye Mao. 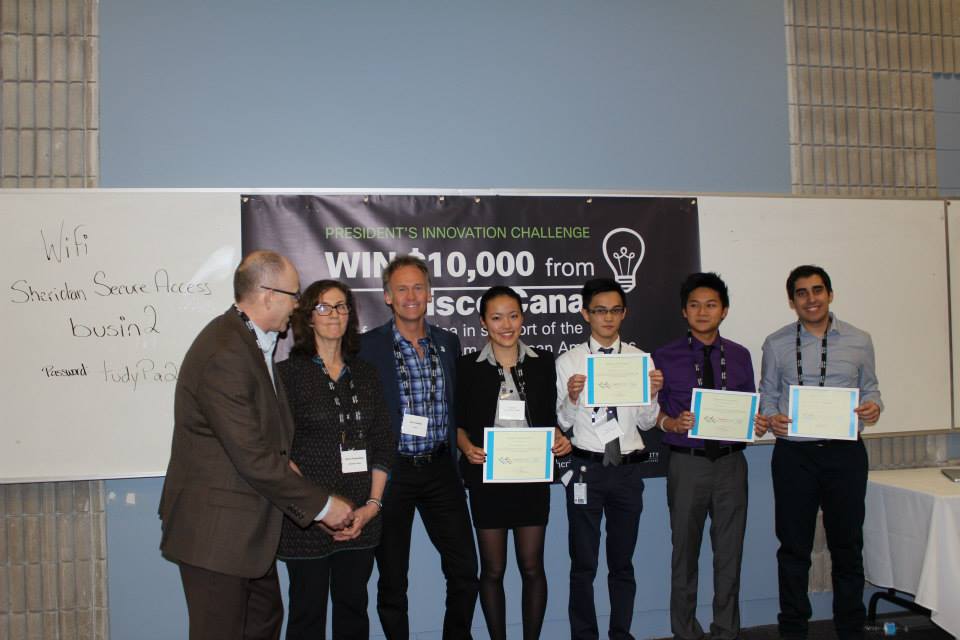 Their winning idea is to develop an opinion aggregator by way of a voting app for an attendee’s smartphone. Users will use the app to vote on athletes at the Pan Am Games in terms of their sportsmanship and all around likability. That data would then be collected and provided to the athletes, to then be exhibited to potential sponsors as a means of quantifying their worth to those sponsors.

The team had only heard about the challenge a couple of days prior to the competition being held, and viewed it as a great opportunity to test their skills and get a small taste of a real world working environment.

They bounced some initial ideas off of their program coordinator, Ed Naus, whose feedback helped shape their initial ideas. Another one of their professors, Mark Shufflebottom, also helped the team better realize their pitch in the hours leading up to the competition. Shufflebottom even showed up on the morning of the challenge for some much-appreciated moral support for the team.

The challenge provided a unique experience for the team by way of being able to exchange ideas with professionals from Cisco, whereas normally people of their generation would have a hard time getting a chance to be in the same room with such industry leaders. The team was continually surprised by the support and great suggestions that were offered up by the roaming mentors present during the first few hours of the challenge.

After advancing to the second round of competition, the team paired up with Jeff Seifert, Chief Technology Officer of Cisco, who provided valuable industry insight on how to make the most effective pitch possible, and helped to fine tune their presentation for the judges. The team attributes much of their success that day to be the result of both their professors’ feedback and the roaming mentors’ insights on their pitch.

Overall, the team views such collaboration between the technology industry and post-secondary institutions as a vital means of innovation outside of a company’s traditional research and development. They view it as a mutually beneficial experience for all involved: students are able to have doors opened to them previously thought shut until they graduate, and more importantly, companies get some often-needed youthful perspective on problems.

The team won a $600 prize after being selected as the People’s Choice award winners, and will use their prize money to further develop their pitch to then be presented to Toronto 2015 Pan Am Games officials later this year.