Internet of Everything Technologies Taking Shape in 2014

Few things move as rapidly forward as advancements in information technology. It’s a whirlwind, even to those of us who’ve spent our entire careers in the industry, but continue to remain daunted by the breakneck speed of innovation that continually happens.

So let’s catch our breath for a moment and pause to reflect on what might be in the year ahead. All signs point to emergence of Internet of Everything (IoE) technologies and solutions. That’s according to Cisco’s most astute technocrats who recently revealed during a “Tech Radar” event what’s in store for 2014. You can view the entire 60-plus minute discussion here. 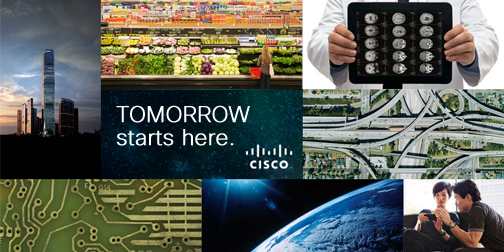 To whet your appetite and paraphrase only some of what they said, here’s what we can look forward to.

Let’s start with new innovations that will push the envelope of real time. Cisco’s tech experts tell us that manufacturers will in a big way during 2014 begin rolling out intelligent networks and sensor technologies to obtain immediate information about the quality of products they produce and the uptime performance of their facilities. In 2014, Cisco experts say manufacturing companies will deploy advanced monitoring tools that allow them to continually analyze data transferred from various plants to centralized datacenter locations, which will in turn help to rapidly improve process and quality.

These might be coupled with more widely used tools that provide the ability to do predictive and preventative maintenance on any number of resources, such as vehicles and manufacturing equipment. Sensors and smart networks will allow companies to identify and correct problems before these occur.

Analytics created through intelligent networks and sensors will be a key. Perhaps among the most basic examples might be seen in networked analytics is something as simple as the replenishment of vending machines. By connecting these machines to networks, operators can identify potentially among thousands of machines what products are running out, which are the hottest sellers, and which are not moving at all. You replenish what’s needed, where and when – an incredibly more efficient approach. A step beyond this sort of application might be the setting of a threshold on a critical piece of machinery or equipment – on an oil rig drill sitting in the middle of the ocean, for example. Establishing thresholds on the temperature of drilling equipment, which when met signals a need for action that could avert a serious and perhaps disastrous incident before it happens. Bringing analytics closer to the source to do real time indexing of data gathered from sensors on machinery and to ultimate take immediate actions will revolutionize industries – especially those such as mining, oil and gas, and hydro-electric production.

A more practical application that will touch most of us might be the early iterations of vehicle-to-vehicle and vehicle-to- traffic-infrastructure interaction. Such things are already appearing and expected to take off in a big way in 2014. Cisco expects that, in the next four years, every vehicle manufactured will have internet connectivity. And by that time traffic infrastructure interaction could be ubiquitous. It could allow vehicles to interact with traffic signals and intersections. Traffic lights themselves might react based on the sensing of vehicle volumes – allowing immediate and longer movement of heavy traffic through intersections or changing or shortening signal light times when there is no traffic. Sensors connected to lights, cars and intersections would intelligently and automatically monitor traffic conditions. It’s easy to see how such intelligence and automation could dramatically reduce congestion and vastly improve traffic flow. Cars might even automatically stop or slow down when approaching a traffic light or stop sign.

Another already seen automobile application that could propagate in 2014 is the ability to locate a free parking spot in malls, offices, and even on city streets. There are currently locations in the United States that feature this sort of application, which can be accessed through an iPhone. The near future sees the Internet connectivity built into vehicles actually having the ability to do likewise – perhaps even automatically paying for a metered spot, and ending the frustration of expired parking meter fines.

From revolutionary machinery maintenance to major efficiencies in traffic flow, it’s only a minor glimpse of what’s in store for 2014. The best is truly yet to come.