At the end of April, Cisco hosted 13 students and 3 teachers from Aqsarniit Ilinniarvik Middle School, in Iqaluit, on a visit to Toronto. Leveraging our partnerships with the Evergreen Brickworks, The Globe and Mail, CFL, Hockey Hall of Fame, David Suzuki Foundation and Ryerson, to name a few, the students had an experience they’ll never forget.  Here’s what they had to say about the trip.

We all agreed, our trip to Toronto would never be forgotten!  It was a whirlwind of fun and excitement.  Something we will remember forever!  We had so many cool activities planned for us; all different and all amazing! 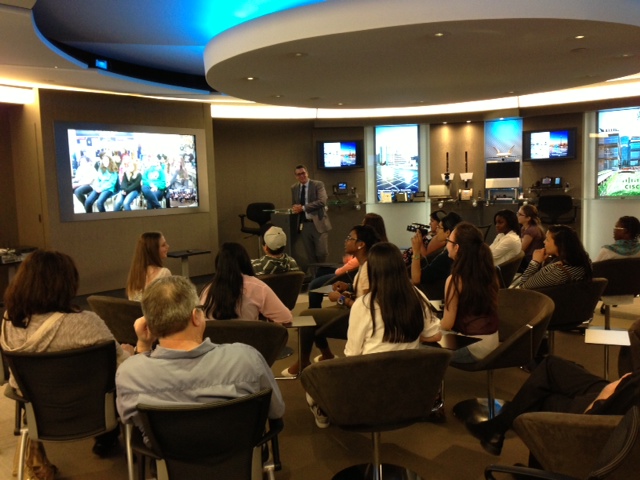 Our first adventure was Evergreen Brickworks. At Evergreen we hiked through a ravine and saw different plants and animals that we don’t have back home.  Trees?  We don’t have any back in Iqaluit.  We learned about the history of Brickworks and tasted different herbs grown onsite.  Some of us decided to taste aloe vera, long story short; bad idea.  We journeyed to our next stop, the Art Gallery of Ontario, where we all agreed, the exhibit, Dark Pool, by Janet Cardiff and George Bures Miller was our favorite.  So, if you haven’t seen it!  You need to check it out!

On the trip we learned about different job opportunities, our heads were spinning with ideas by the end of it!  We went to Ryerson University, where we got to see the Digital Media Zone where we learned about creating our own business, and how going to school can make this possible.  At RBC, we learned some tips on how we can maintain our money and achieve our goals.  This bank is way cooler than the one at home!

Now we have one name for you that you need to remember; John Stackhouse.  He is the Editor and Chief of the Globe and Mail and he is a super cool guy.  With all of us being in a film club, we were all taken back to learn about the different jobs at the Globe and Mail, that had to do with film.  Two of us got to be in the spot light.  Lights, camera and action!  We were in the newsroom, where a film crew recorded an interview we had with an actual reporter!  The interesting encounters didn’t stop there!

We met some famous athletes in Toronto and I’ve got to tell you, all of our friends in Nunavut were really jealous when we told them.  At the Hockey Hall of Fame, we were greeted by a real hockey pro, the one and only, Ron Ellis.  He told us how Irvine “Ace” Bailey, a Maple Leaf star and one of his idols, brought his “number 6” out of retirement so that he could wear it.  Joe Eppele, offensive left tackle for the Toronto Argos, was another awesome person we met.  Joe and his manager talked to us about their experiences with bullying.  It was comforting to know that anyone can overcome bullying, even athletes!  Their stories really touched us, because back in Iqaluit bullying is a big problem, and just talking with them gave us some great ideas on how we can make a difference back home.

Being the kids in the film scene back in Iqaluit, we were excited to be part of Toronto’s Student Film Festival.  We had two films featured and our group got to stand up and everyone was fascinated by the fact we were from Nunavut! Some guy who held a door open for us said to his friend, “Dude, I have to hold the door for them, they’re from Nunavut!”  We felt like celebrities from the North!

We were reintroduced to Martha Burns and we met her husband, Paul Grosse, for the first time!  They are both Canadian actors and they are very sweet people!  We even got to meet an actress from Degrassi!!!  We spotted her at Young People’s Theatre, where we got to see a play.

Now, we saved the best for last, which was the day we went to the Cisco office.  We were told that Cisco is bringing four TelePresence (TP) screens into our school.  And these giant screens allow us to connect with teachers and other classrooms in Canada.  We honestly didn’t know what to expect.  But when they brought us into this giant room that looked like it was from the future, we finally got to see what these screens were all about.

Nicole Geronimo, Project Coordinator from Cisco Canada asked us on our first day in Toronto, what we were most excited to do on this trip, and we said two things; shopping and meeting people. We are from such a small community that we never meet anyone new.  But today, Cisco helped us meet an awesome group of kids like us! We were connected live, through this giant screen (TP), to a classroom in Peterborough.  It was like they were at Cisco with us.  We talked about our favorite movies, our hobbies and our dreams.  The class from Peterborough even broke out into the Harlem Shake!  It was nonstop laughter!  We were then joined by Dr. Thomas Merrit from Lake Head University through TelePresence.  He spoke to us about genetics and DNA!  He made learning a game and some of us even won t-shirts that he shipped to Iqaluit.  The best part is, with the donation of this technology from Cisco, we will get to do this ALL THE TIME!

Following Dr. Merritt we met with Faisal Moola, who works alongside David Suzuki and he spoke to us in person about Global Warming.  It was the most interesting speech on Global Warming.  He really got to us; it’s insane what’s happening to the world as we just sit around and watch.  We all felt there is something we could do about it and we were offered a chance to work with the David Suzuki Foundation to create an energy efficiency plan for Nunavut.  We really felt that we could get involved, and we can use the technology that Cisco is giving us to help change the world!  Faisal said they have TelePresence at the David Suzuki Foundation as well, so we can meet with him through this technology to talk about our energy plans and how to make them actually happen.

Being at the Cisco office really got us excited about the TelePresence that is coming to Iqaluit!  With these screens being put into our school, we can do so many exciting things that can positively affect Iqaluit!  We can make so many new friends from different schools and share our ideas with each other!  We can meet scientists and famous professors, and learn tons of different subjects!  We can even help people like Faisal at the David Suzuki Foundation!  So Cisco, hurry up and set up those screens already!

We are back in Iqaluit and we are all a bit depressed to be with snow and no malls, but we are with our friends and families, and they make up for the “unToronto-ness” of our home.  We want to give a shout out to Cisco for making this trip happen!  We had the time of our lives!  And we hope to be seeing you all soon from our brand new TelePresence System!