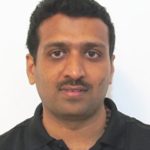 He started his career as a software developer with Andiamo Systems that developed the MDS series of Fibre Channel switches and was later acquired by Cisco. His later stints included designing and developing protocol and platform software across the Data Center portfolio of Nexus-7K, Nexus-5K and MDS switches.

In recent years, his focus has been on the architectural aspects of MDS and keeping track of trends in storage and storage networking.