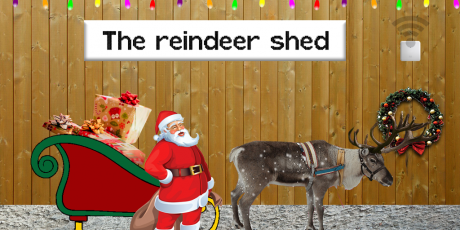 “Any sufficiently advanced technology is indistinguishable from magic.”

I often think of that Arthur C Clarke quote when I see some of the fantastic things human beings have achieved in recent years.

As children we like to believe in magic, especially around Christmas. But as a technologist I prefer to put my CTO hat on and ask:

Never mind magic, what technology could Santa use that would help him achieve the same end result?

In this extremely important and completely scientific article, I’m going to explore five tech tools Santa would use in 2016…

With driverless cars fast growing in popularity, there’s only one way Santa’s sleigh could go in the 21st century.

But that’s not to say poor Rudolph and his reindeer colleagues will be out of a job.

The reindeer still provide the power. But rather than Santa controlling them manually with reins, artificial intelligence (AI) tells them where to go and how to get there.

The AI uses machine learning to work out the fastest routes, meaning Santa’s Christmas Eve shift gets shorter every year. And sensors on the sleigh ensure he avoids any birds, planes or tall buildings.

This means our red-suited hero is free to focus on some of the more strategic Christmas Eve tasks, like working out how to pace his mince pie and brandy consumption for maximum enjoyment.

There’s never been a better time to connect everything around us using the internet of things (IoT), and Santa’s suit is certainly no exception to that rule.

By using a whole range of IoT sensors, his suit goes beyond the realm of fetching winter fashion and becomes a piece of intelligent wearable tech.

Running around rooftops in Australia is sweaty work at this time of year, but temperature sensors in Santa’s suit send signals to a temperature regulation system that keeps him from getting too hot or too cold, depending on where he is.

The suit contains location sensors too, beaming Santa’s position back to his team of elves on the ground so they can make sure everything’s on track.

And it talks to his sleigh and reindeer so they know when to start moving and when to stop without him giving a signal, or where to locate him if they somehow get separated.

Of course, no connected Santa suit would be complete without a built-in display providing our man in red with all sorts of information: his current speed, time to the next chimney, number of presents left in his sack, heart rate, blood-brandy ratio, the list goes on…

And it’s all available to him at the touch of a screen.

There are almost 2 billion children in the world – there’s no way Santa is going to have time to keep track of their behaviour without some help.

But he’s definitely still going to find out who’s naughty or nice…with the help of AI!

An enormous AI-powered supercomputer at the North Pole works hard aggregating and analysing data about each individual child’s behaviour.

The AI places names into the ‘Naughty’ or ‘Nice’ column on a massive database, and the more it analyses children’s behaviour, the faster it can determine whether they’re deserving of a present or not.

That database then feeds directly into Santa HQ’s present-making algorithm.

Which brings me to the next point…

Christmas lists are so 20th century. Or at least ones made of paper and ink.

In 2016 Santa’s list is delivered to him via the present-making algorithm (PMA) I mentioned above, which makes personalised gift decisions based on data collected throughout the year.

A kid lingers at a shop window staring at a shiny new bike? Asks for a drum kit more than 15 times a day? Goes googly-eyed every time they see a Star Wars drone? All that information is sent to the PMA and will be taken into account when the final gift decision is made.

Again, AI plays a big part in this process. There’s simply no way humans (or even elves) alone could collate and crunch all that data in time for the big day.

And it means each child gets the present he or she really wants based on accurate, real-time information.

No need to waste all that paper anymore (or remember to write a list in the first place)!

With all this data flying around, the North Pole talent requirements have shifted firmly in favour of cybersecurity – much like in the commercial world.

And thanks to AI freeing the elves from arduous present-picking and naughty list-deciphering, there are plenty of them about to retrain as security experts.

Can you imagine the potential fallout if there wasn’t?

A full list of everyone who’s naughty and nice being released for the whole world to see. Present preferences sold to the highest bidder to be used for unscrupulous marketing campaigns.

It doesn’t bear thinking about…

So there you have it: my technological take on how Santa gets the job done.

As I mentioned earlier, the things technology can do today are arguably more impressive than any magic. And while this article might be somewhat tongue-in-cheek, hopefully it helped you reflect on how far tech has come.

With that, I wish you a very merry Christmas and a happy New Year.

See you on the other side!