Representing Canada by Carrying the Torch

How does it make you feel being an athlete and representing Canada by carrying the torch?

Being a torch bearer to me is symbolic of the experiences: the trials and tribulations, the wins and losses, the love and strife of not only me, but of my family, my neighbors, and my home of Canada. Words cannot express my gratitude, appreciation, and love of being an athlete, a student, a citizen and representative of Canada for this occasion and hopefully many more. Being a torch bearer has been one of the greatest honors I have ever been granted in life and as an athlete as it symbolizes Canada’s appreciation and recognition of me as an athlete, of everyone who has aided and guided me to where I am. To me, this torch is literally the weight and fire of all of the hard work us athletes pour into our passions and of the love and dedication our parents and teammates give on a daily basis. Every step on this torch run will be symbolic of the millions of steps I have taken while training for a competition. Passing the torch represents that I am passing the torch onto the younger generation that I hope to be a positive role model for. As a citizen of a nation whose livelihoods rested upon the bodies of men and women who have worked hard and given much effort to raise us, I, too, am appreciative of the value of whole-hearted dedication in doing my best for my country, win, lose or draw. It is for the sake of preserving the honor of those who have sacrificed to give me these opportunities. 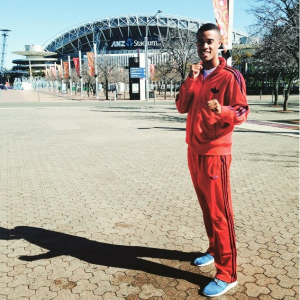 Born in Toronto, Adam has been enrolled in the martial art and Olympic sport of Taekwondo at his parents business since a very young age. In 2012, he participated in his first national championship; he finished in second place but felt inspired and fortunate to have accomplished such a huge step in his life. From that moment forward, his love for taekwondo and patriotism for his country exploded and with his new ambition and increased drive, he won his first Canadian championship in 2013. Later that same year he successfully prepared for his first Pan- American Championship in Mexico, while balancing his high school academics, and won gold with the support of his father, coach and teammates. In 2014 he won his first senior national championship, bringing him closer to his dream, to participate in the Olympics. Adam won a gold medal at the 2015 nationals as well as his first quarter final finish at the 2014 senior PanAm championship in Mexico. To Adam, it isn’t the glory in itself of winning but the struggle, the pushing forward, the journey to represent Canada and the love for the sport and his country that truly makes him happy along his journey of being an athlete.