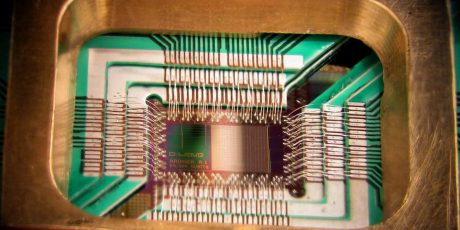 TechTalk: Are we on the verge of a quantum leap in computing?

Imagine a mathematical problem so complex it would take the computers of today 10,000 years to solve.

Now imagine a machine with the processing power to complete the same calculation in just a second. How is that even possible? Quantum computing.

We’re inching closer to a new era of the possible, and so for my latest TechTalk blog I wanted to explore this mind-bending area of technology and engineering and what it could mean for society in the future…

Let’s start from the top: What is quantum computing?

The ‘classical’ computers of today (it feels strange writing that!) share information in a sequence of 1s and 0s (or bits), created by transistors being switched either on or off.

Quantum computers work by using the ability of subatomic particles to exist in more than one state at a time. It feels like an alien concept at times, so bear with me…

Rather than bits, quantum computers operate on qubits. We still have 1s and 0s but qubits can also have every possible combination of 1s and 0s, (on or off) at the same time.

Qubits are processed simultaneously as opposed to sequentially in a traditional computer. This opens up a whole new realm of possibilities in terms of processing power.

Why is quantum such a step forward?

Quantum is more than just a leap. The number of possible combinations increases exponentially with the number of qubits. As a result, this translates into exponential speed increases, versus today’s computers.

It will give us the ability to solve very complex problems that we can’t right now, owing to being able to analyse different options in a problem simultaneously.

In terms of how big a jump we’re talking, in 2015, researchers from Nasa and Google found their D-Wave quantum computing outperformed a traditional desktop machine by x108 times.

Sounds impressive, right? According to Google what this machine does in a second would take a conventional computer 10,000 years to complete.

What will quantum computing allow us to do differently?

With such a significant leap forward in processing power, the main use case is in tackling highly complicated mathematical problems.

I can see this being applied in both data analytics (at a scale difficult to imagine at the moment), artificial intelligence, as well as in cryptography and cyber security.

Many experts in this field say we around five years away from creating a commercially useful quantum computer. There have been a number of small successes so far (such as being able to send a qubit through a logic gate) but there is still a way to go before businesses will be able to use them.

How does quantum impact Moore’s Law?

People are now starting to challenge Moore’s Law, purely because we have reached a point where it’s becoming impractical to shrink transistors any further.

In classical computing if you double the power, you need to double the hardware.

But with quantum, to increase power all you need to do is add one more qubit.

Growth in qubits therefore puts us on an exponential curve – beating the linear prediction of Moore’s Law.

What are the barriers for making this happen?

The (simple) answer: The complexity of the technology itself. Quantum theory at times completely defies ‘traditional’ logic.

Quantum is being in multiple matters of state at once, rather than just on or off. It’s alien to the way humans naturally think, and as a result it makes it harder to explain to those who might invest in developing the technology further.

To further add to this complexity, while the first true applications may be five years away, it is unlikely we will see that in the form of a personal computer.

However, that could be one of those classic statements: “One computer is enough for everybody.”

From what we can see at the moment, these machines will be primarily used for solving those massively complex mathematical problems – your average person in street simple doesn’t need that level of processing power, for now.

So what will quantum do for us?

Advances in quantum are closely tied to the advances being made in physics and chemistry. These subjects are running in parallel, pushing along the different streams of research in their respective fields.

An interesting example of this is nanotechnology (read my previous TechTalk on nanotech here), and the types of new materials that we’re able to create.

Using quantum computing we could run a vast number of tests and models on molecular interactions at an atomic level.

Once you start creating those types of modelling at an atomic level, then you can start to produce personalised medicines for people.

This sort of modelling is simple, something we can’t do using classical computing methods at the moment.

Quantum will allow us to tackle the limit around any information related task, and I’m fascinated to see how this technology will develop over the coming years.

There is even an experiment looking at the quantum teleportation of data – the realms of science fiction may just become reality in a new quantum era.