The London technology scene is booming. According to one study, it accounts for 30% of job growth in the city since 2009. In 2015, digital firms in London raised $2.28 billion, up 69% on 2014. Tech is also firmly on the political agenda, with the Mayoral election just around the corner.

One person who is playing a big role in shaping how London is perceived and organises itself as a global technology leader is Russ Shaw. He is the founder of Tech London Advocates, a 2,500+ strong, not-for-profit group which champions London’s technology sector. 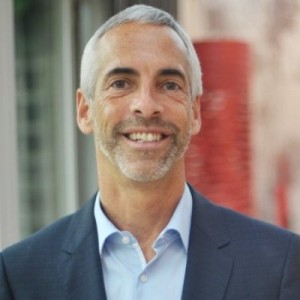 Start-ups are an essential part of the technology infrastructure in London and, indeed, around the UK. When we conducted our own survey, prior to setting up the Start-up Hub, our own community highlighted the need for greater access to support from their peer group. Tech London Advocates is a living and breathing example of that.

Following the publication of the Mayoral Tech Manifesto, Tech London Advocates, Centre for London and techUK are running DebateTech, a tech London event with the Mayoral Candidates.

Since Cisco is taking part in supporting DebateTech, I caught up with Russ to ask him about Tech London Advocates and what he hopes to achieve with DebateTech.

Tom: Where did the idea for Tech London Advocates come from?

Russ: “I had the idea about four years ago. I was invited by Rohan Silva, an adviser to the Prime Minister, to come and be part of his Tech City Advisory Group. And I wondered, where is the private sector ecosystem to support this?

“It’s what Silicon Valley has been doing for many years. 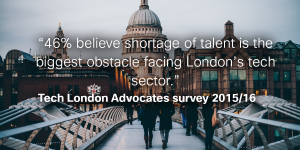 As an entrepreneur, when you meet a VC in Silicon Valley, chances are they’ll say no, but it usually comes with an introduction to someone who might be able to help.

“I felt that as London’s tech scene was starting to grow, we needed a group that could provide that kind of support.”

Tom: What’s the reason behind the DebateTech event?

Russ Shaw:“We know we’re going to have the Mayoral election. We thought, wouldn’t it be great if we brought the candidates together and asked them, what they would do for London’s digital and tech sector? I don’t think this was something we were ready for last time around. Since that time, the growth in this sector has been phenomenal. 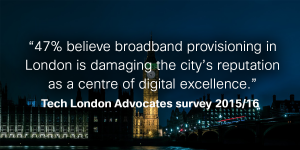 “I felt whoever comes into City Hall needs to know: what’s going well and what are the issues and challenges they can respond to? So, we worked with Centre for London and Tech UK to create a manifesto that the Mayoral candidates could respond to.

“It led to the idea of creating a hustings event. We’ve got organisations like Cisco, who are heavily embedded in the tech scene in London and around the UK, involved too.”

Tom: What role does the next Mayor have in the London technology scene?

Russ:“Whoever comes into City Hall needs to show leadership. I have to say, there are already some encouraging signs out there.

“In December we took part in a tech tour with Sadiq Khan. 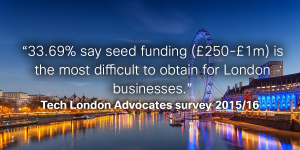 He said, ‘you’re going to see a lot more of me’ and to his credit we have.

“And then if I look at Zac Goldsmith. He launched his business manifesto last week and two of his elements – hiring a chief digital officer and creating an office for data analytics – were already two of the recommendations in our manifesto.

“The candidates have blogged and tweeted about the tech manifesto and what they think about it. I take these as positive signals and they are listening and engaging with the community.”

Tom: What can people outside of London take away from Tech London Advocates?

Russ:“I was in Manchester last week talking to people about creating a Tech North Advocate group, which will cover Liverpool, Manchester and Leeds, all the way to Newcastle.

“There’s already the Tech North organisation, which is a government supported organisation. So this group would be like a sister organisation to Tech London Advocates.

“I’m also talking to people in the Midlands and we are discussing launching a group there too.

“As other tech communities are emerging and growing across the UK, there’s no reason why we can’t create similar ecosystems. And, the beauty is that we can inter-connect these eco-systems. For example, with businesses in London and Manchester that are working together, we can make sure they’re members of both communities.

“It’s important that these groups don’t work in isolation – they are stronger together. There are groups in China and India too; we can connect these to our UK groups.”

Tom: Beyond entrepreneurs, who can get involved in Tech London Advocates? 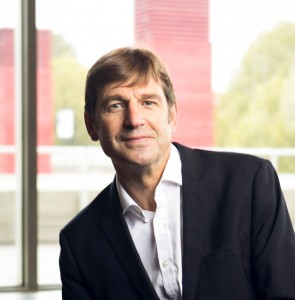 Russ: “The group is open to anyone. We have teachers, students, artists, designers, along with big corporate bosses like TalkTalk’s CEO Dido Harding and Facebook’s EMEA vice president Nicola Mendelsohn.

“It’s free to join, but the idea is that advocates introduce new advocates, so the group is made up of people who share a passion in technology. If people want to get involved, they can look at the website, see who’s involved. With over 2,500 advocates, chances are you’ll already know someone in the group who can invite you.”

DebateTech is held on Tuesday 9th February at Here East and will feature Caroline Pidgeon, Sadiq Khan, Sian Berry, Zac Goldsmith and Peter Whittle, plus my colleague Andy Chew, who will take part in the panel debate.

You can follow all the action on Twitter via @CiscoUKI and @TechLondonAdv through the main event hashtag #DebateTech.

Get involved! Let us know what you think the next London Mayor should be doing to support the start-up scene in London. What would be your top priority if you were mayor? What do you think Andy should be asking the candidates?