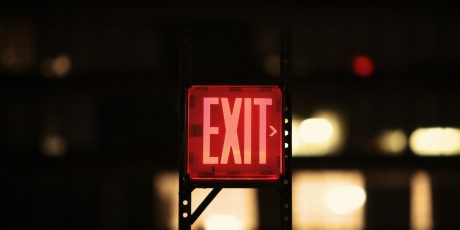 Cisco Start-up Hub: To exit or not to exit? Exit strategies explored 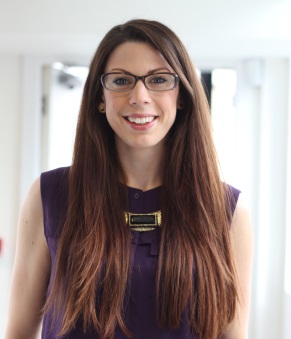 To those outside of the world of start-ups, the idea of setting up a business in order to pass it off to someone else might seem an odd one. Start-ups, among other things, are often labours of love. And people usually try and keep hold of the things they love.

There are, however, a number of reasons why entrepreneurs consider – or sometimes start up with the sole intention of – ‘exiting.’

Typical exit examples include being acquired by a larger company, making an initial public offering (or IPO) and floating on the stock market, or a combined merger & acquisition deal (though these are less common for start-ups and smaller companies).

But exits aren’t for everyone. In her latest column for the Start-up Hub, Tech City News editor, Emily Spaven, weighs up the pros and cons of making a dash for the exit…

Magic Pony did it, Arm Holdings did it, VocaLink did it. What do they all have in common? They all exited this year in multi-million-pound deals.

For many start-up founders, exiting is the ultimate goal, the pinnacle of success. But for others, it doesn’t feature anywhere on their ideal roadmap.

“We don’t have an exit strategy … We didn’t start a business to get out of it,” he wrote in a recent post.

“If you’re going to spend years of your life and an obscene amount of energy and time with a team you enjoy going into battle with, why would you think about the exit?” he added.

Sanwal went on to suggest focusing on an exit can be damaging for a business. He believes those who focus on an exit are taking their attention from what should be their priorities – in his case his product, team and customers.

However, he backtracked somewhat with a ‘never say never’ kind of comment, stating that “if someone shows up with dumptrucks of money and is going to do right by the team and the product” he’d enter into talks. Sanwal also highlighted that CB Insights has investors (the company raised $10m in 2015) who will want an exit at some point, but in the meantime, he’s happy working with his team to build “a company we’re proud of in the way we want”. 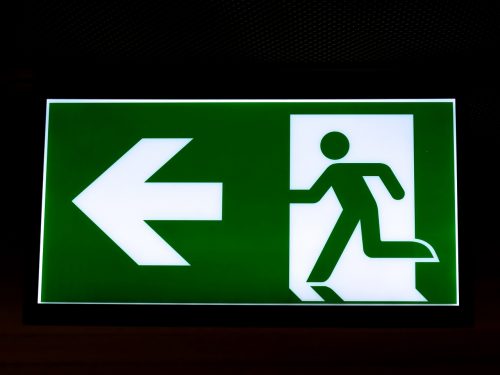 Snapchat is another notable example of a company not hell bent on an exit. The app famously rejected a reported $3bn offer from Facebook in late 2013.

“There are very few people in the world who get to build a business like this,” the company’s co-founder and CEO Evan Spiegel told Forbes. “I think trading that for some short-term gain isn’t very interesting.”

A brave stance to take, given the “short-term gain” would have made him about $750m.

To look at a local, UK, example, we have SaaS business PCA Predict. At the end of last year, co-founders Guy Mucklow and Jamie Turner decided to sell their business. They were offered $100m for their company, which deals in international checkout optimisation and data cleansing, but at the very last minute decided to turn it down, instead choosing to scale the business themselves.

Eight months on, do they regret the decision? For Mucklow, it’s a no.

The company is self-funded, which Mucklow implies had a big impact on their decision to walk away from the offer. They don’t have external investors to please and their success is solely down to their own funds and their own hard work.

“There is much more emotion involved. That in itself made it a little easier to turn down a nine-figure offer,” Mucklow added. 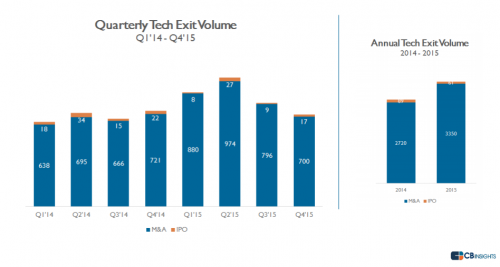 The likes of the CB Insights, Snapchat and PCA Predict may be anti-exit, but there are thousands upon thousands of tech start-ups that aren’t, and there’s nothing wrong with that.

Of the tech companies that disclosed their valuations, 54% exited for less than $50m, with just 3% exiting for over $1bn.

Unsurprisingly, most of these exits came from the US, with the United Kingdom leading all non-US countries, followed by India, Canada, Germany, and France.

Further data from Tech.eu shows the most popular verticals for tech exits in Europe in 2015 were e-commerce, telecoms and infrastructure, FinTech, AdTech and Security.

Nick Jones, partner and head of Technology at Cavendish Corporate Finance, advises mid-market companies on how to sell their businesses. He described preparing to sell a business as “a lengthy and complex process” and said it’s something that should be considered from the get-go.

“When first setting up a company, it is always wise to have also planned the exit. If from the outset a management team has decided on what type of buyer will give them the best value on exit, say a trade or financial buyer, they can then grow the business in the most appropriate way to make the business as attractive as possible for this type of buyer,” he explained.

Timing is also key. Company owners need to remember that, in order to get the best deal, it’s a case of not waiting until they’re ready to sell, but offloading when the market is hot.

“It is important that business owners recognise that the value of a business is not based on what they think it is worth, but on what the markets will pay for it,” Jones added.

As the moment of exit nears, there’s a lot companies need to do. They must, for example, make sure all shareholders are aligned and agree with the sale process, ensure that a tried and tested management team is in place, alongside a strong finance team. All legal due diligence needs to be completed and steps must be taken to protect IP – a failure to do so can be a real deal breaker, said Jones.

His main message is that planning is everything: “Having a plan in place will minimise the time needed to be spent on exit, and will ensure that there are as few issues as possible, and that the sale goes smoothly.”

Should you be working towards an exit? There’s no right or wrong answer – it comes down to what feels right for you. Not desiring to sell doesn’t make you a short-sighted fool, and wanting to exit doesn’t make you a sell-out. Both are perfectly valid business decisions, so just spend some time thinking about what it is you want.