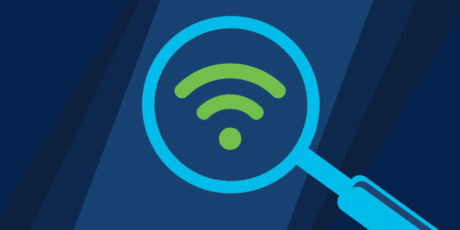 What is Wi-Fi 6 and 6E. Demystifying the Wi-Fi alphabet soup 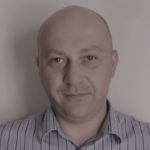 Not that long ago Wi-Fi 6 was the topic everyone was talking about (still is actually), and now, what feels like almost immediately, we have Wi-Fi 6E. While ever-changing abbreviations and acronyms have become the norm, it is important to understand what they represent.

The latest iterations of the wireless protocol are significant, and quite different compared to the improvements that came before. This post will demystify why that is, and explain why the combination of Wi-Fi 6 and 6E are changing the way we experience Wi-Fi.

There have been a number of improvements to the Wi-Fi protocol during its lifetime, a little over 20 years now. Historically we did not refer to them by their numbers but rather by the specific IEEE designation (IEEE is the governing body that sets out the rules by which all networking equipment interoperates).

We started with 802.11a, then 802.11b, 802.11g, 802.11n, and 802.11ac, each of these represented a generation of Wi-Fi, and a step forward in the capabilities and performance of our wireless devices. There were also numerous other enhancements along the way which explains the missing letters in between. All of this resulted in a bit of an alphabet soup of capabilities that only wireless engineers understood. In an attempt to simplify, we refer to the current (802.11ax) wireless standard as Wi-Fi 6, simply because it’s the sixth one.

Stages of development of Wi-Fi technology

So, what has changed? And why are Wi-Fi 6 and 6E more than just another number? To understand this, we need to talk about wireless channels.

Have you ever driven long distance in a car while listening to the radio, and suddenly your music was gone and you heard something else? That’s interference. Its another radio station broadcasting using the same frequency, and it means you don’t hear just one transmission, but a combination of both. We can’t have two transmissions on the same frequency without interference. It’s exactly the same for Wi-Fi, each wireless access point (AP) transmits on a specific frequency (called a channel), and if we have multiple APs on the same channel, we get interference. The result is similar to what happened to the song you were listening to, except it’s happening to your data.

From the example of the radio station, we already know we shouldn’t have two transmissions on the same channel, but we can transmit more efficiently – this is what Wi-Fi 6 does.

In the example below, we have one AP communicating with four wireless laptops. 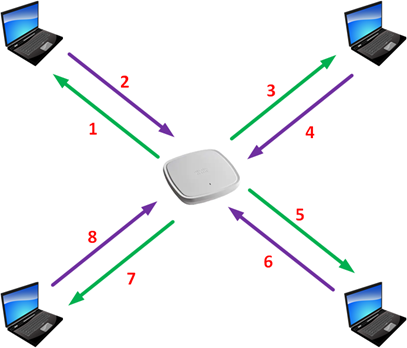 Traditionally (i.e., in every wireless standard before Wi-Fi 6), every time a transmission needed to be made, either to a device or from a device, the whole channel was used. This meant the transmissions occurred sequentially, with every device having to wait for the previous transmission to finish. This is inefficient in cases where the transmissions are relatively small, which many wireless transmissions tend to be. What this also means is that wireless is half-duplex, i.e., unable to transmit and receive at the same time.

Wi-Fi 6 introduced numerous efficiency enhancements, but let’s look at just one, OFDMA (Orthogonal Frequency-Division Multiple Access). With OFDMA we now have the option of transmitting to (or more specifically, addressing) multiple devices simultaneously. In the case of our example with four laptops, the picture now looks a little different. 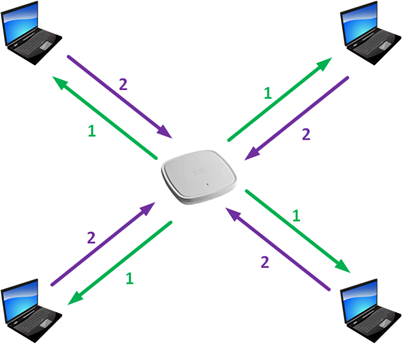 The case of our example with four laptops, but already with OFDMA.

We still can’t transmit and receive at the same time, but we can transmit to and receive from multiple devices, theoretically up to 74 devices at once (quite a bit more than the four laptops in our example). This ability to bundle network packets for multiple devices into a single transmission has great benefits, particularly in high-density networks. With Wi-Fi 6 we achieve better performance even when the number of connected devices is high. It is the first wireless standard to address efficiency rather than just throughput and is known as the HE (high-efficiency) wireless protocol.

There are two ranges of frequencies available for Wi-Fi devices, the 2.4GHz range and the 5GHz range, each providing channels for wireless transmission. The 2.4GHz range is relatively limited in this regard, and realistically only gives us three channels to use. Let’s look at the 5GHz range.

Each channel is numbered and has a width of 20MHz, however not all channels are created equal.

It is also possible to bundle multiple channels together to form wider channels – increasing bandwidth. As an example, each configured 40MHz channel would consume 2x 20MHz channels, while this provides significantly more throughput it also reduces the number of channels available. Similarly for the wider channels of 80 and 160MHz, these seldom get used as it severely limits the available channels, resulting in more APs on the same channel, and more interference, often defeating the benefit of wider channels.

This limited channel problem has been a feature of Wi-Fi for years, with only minor additions to the spectrum in certain regions. Wi-Fi 6E changes this.

Wi-Fi 6E makes new spectrum (more channels) available for Wi-Fi networks through the addition of a new frequency range (6GHz), the largest increase in radio spectrum in the history of Wi-Fi.

Again, the regulations will differ per region, the FCC (governing body for the US) has already made a full 1200MHz available for use, with ETSI (EU) regulations soon to follow. The implications of Wi-Fi 6E are far-reaching, not only is the amount of additional channel space large, allowing for the use of 80 and potentially 160MHz channels in enterprise deployments, but it is also totally new spectrum which means only modern Wi-Fi 6E certified devices will be able to use it, eliminating the issue of legacy devices slowing down the network (at least for now). As of today, some client devices are already Wi-Fi 6E certified.

Wi-Fi 6 prioritises efficiency resulting in faster speeds under load, by introducing optimisations for efficient use of the existing channel space, most notably OFDMA. While the additional spectrum provided by Wi-Fi 6E takes this one step further, providing more, and cleaner channels, enabling new wireless designs and even higher throughput.