The Windy but Smart City – IOT World Forum – a perspective

One of the things about working for Cisco is that you get to go to some pretty cool events, these include some of our more established traditional events such as Cisco Live, where we gather the largest group of customers, partners and industry experts, or GSX, our annual Global sales conference, and now we have the new kid on the block “The Internet Of Things World Forum” (IoTWF) which was just held for only the second time last month in Chicago. See the Highlights here. 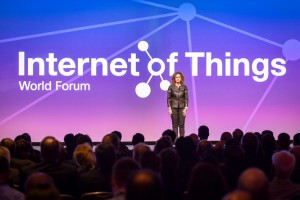 Forum held in another ‘smart’ city’ – Barcelona.  Last year we gathered some 700 delegates, but Chicago took on a whole new scale with nearly 1600 attendees. It just showed how far IOT has moved on as a global technology phenomenon, how many companies there are in the ecosystem and how many customers are seeking answers or wanting to find user cases that could transform their business for ever.

Chicago is known as the “Windy City” because of the fresh (cold) winds that blow off of Lake Michigan, but it’s not just windy, in fact it is positioning itself as the smartest and fastest developing business city in North America under the leadership and guidance of Mayor Rahm Emanuel and his team. It is also the place where the skyscraper was invented, and bizarrely the zip, so it was clearly the most appropriate place in the world for Cisco to assemble the “movers and shakers” of the industry to really understand the possibilities of the emerging IOT market.

What an opportunity and what progress! Cisco has already described an overall opportunity in value terms of over $ 19 trillion across private/public sector and taking account of both top line revenue opportunities and bottom line savings. In terms of progress towards goal there are already more than 24B sensors shipped, 14.4 B connected devices, 4.1B M2M (Machine to Machine) connections, more than 100 companies in the Industrial Internet Consortium (IIC), importantly 7 standard bodies formed and some 300,000 developers in IOT alone.

In terms of investment, following Googles acquisition of Nest in 2013 for $3.2B, we have seen summer acquisitions by Amazon of Twitch for a cool $1B and Samsung of SmartThings for $200m. We were told of the growing 100’s, make that 1000’s, of start-ups developing innovative ideas in IoT – some showcased at the start up area at the event. We heard about the near $1B of VC investment into IoT (some 10% of all VC investment)  and the acquisitions in IoT totalling some $5.3B over 28 companies so far – clearly a sector to be involved in and innovating in!

The key question on everyone’s mind though was – is IoT at the top of the hype curve, or already over hyped? Has the opportunity been over stated?

Can we afford to ignore IoT?

Over the 3 days Cisco and the group of industry leaders, city leaders, partners and customers sought to answer those questions and set the course for the industry over the next year or so.

At the same time it was a chance to continue to highlight and showcase some of the great emerging innovations and talent coming through from innovators and start-ups working in and around this emerging technology, from underwater Internet of Things, the internet of energy, connected toys to connection of almost anything imaginable from companies such as Evrythng.  This culminated in the Final of Cisco’s Global Grand Challenge for IoT; a live Dragons Den style final where 6 early stage companies pitched to a panel of judges made up of investors and technologists who specialised in the field of IoT. The final was close, they were all good, and the winners were impressive. You can read more here.

But it wasn’t all about emerging innovation it was also about practical examples of current IOT deployments – from the great presentation from John McHagh at Rio Tinto showing the use of IOT-related technologies in Open Iron Ore mining in Australia and how this has fundamentally changed the way the company operates a mine. Right the way through to the Chicago Smart City tour – an opportunity for delegates to take a walk around a city to see and hear how technology is helping make the city run smarter, cleaner and cheaper – we saw intelligent bins for recycling that inform the collectors when they are full – saving the city between 10%/20% on the running costs of the truck fleet collecting rubbish and recycling. Not forgetting the one that everybody liked; the Snow Tracker app that advises citizens where the snow ploughs are, so that they know when their street will be cleared and when to just work from home!

IOT is truly coming of age

There so many observations during the week – from “when will there be the first IOT based rodent control app” to the observation that as the global population surges towards 9 billion, usage of energy, water and food will continue to increase and therefore the need for IOT and smart cities that can keep these things in check becomes key.  Think how the IOT can help resolve the energy challenge of 2050 by putting more intelligence in our systems. Not to mention the coming together of IT and OT into a fully integrated and intelligent infrastructure; whether that’s in the oil and gas world by connecting the well to the wheel or connected policeman remotely monitored for stress and tiredness levels.

The IOT is now. The governments, cities, companies and organisations that “get it” are investing now and also creating the environments where further innovations, opportunities and savings can be realised that will take IOT truly into the world of the Internet of Everything (IOE) that Cisco describes so vividly. Most definitely the IOT is now, it is not just hype. Roll on next year and Dubai for the next edition where I am sure the impact of IOT will have increased significantly yet again!