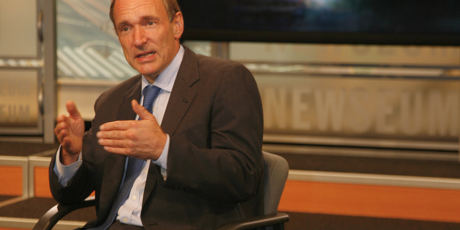 The story of Sir Tim Berners-Lee, inventor of the World Wide Web

Ahh. Those were the days. That clunky electrical jingle of the mid 90s would mean only one thing – in approximately two minutes you would be connected to a glorious new world dubbed ‘The Internet’.

The man ultimately responsible for bringing this joyous soundtrack into our homes was Sir Tim Berners-Lee – the pioneering Brit who invented the World Wide Web.

Here is his story… 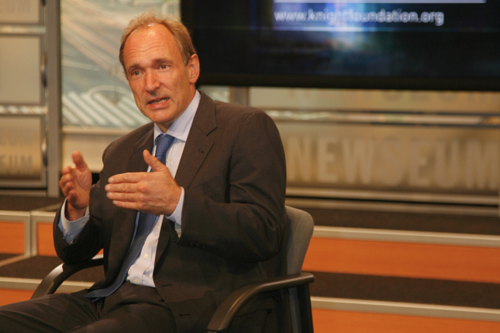 You’ll remember from one of my previous scribblings that it was Welshman Donald Davies who was responsible for ‘packet switching’- one of the foundations of the Internet we know and love. Of course, this was just one piece of the puzzle, transforming the way that we were able to send and receive data (essentially lots at once, rather than just one bit at a time).

Eight years later, Tim Berners-Lee (or TimBL, to his pals) would graduate from Queen’s College at Oxford University with a first in Physics.

He had grown up surrounded by electronics. His parents worked on the first commercially built computer, the Ferranti Mark 1, and as a nipper a young TimBL got his first taste of electronics by playing with his model railway.

It was during his time at Oxford where he would build his first computer; armed with a soldering iron, TTL gates, an M6800 processor, and an old television. Impressive!

In 1980, he started working at CERN, the European Particle Physics Laboratory in Geneva. This is where Berners-Lee first came up with the idea for a global communication system through ‘hypertext’.

It wouldn’t be until 1989 that this idea would fully blossom, when he published a paper called ‘Information Management: A Proposal’. He suggested joining up hypertext with the early Internet of the time, creating a system for sharing and distributing information not just within a company, but globally.

He named it the World Wide Web.

Amazingly, in the original document he asked for just four software engineers and a programmer to deliver the project. If they’d only known what this would be become…(If you fancy a bit of extra reading, check out the original proposal).

“Creating the web was really an act of desperation, because the situation without it was very difficult when I was working at CERN,” TimBL revealed in a later interview.

“Most of the technology involved in the web, like the hypertext and multi-font text objects, had all been designed already. I just had to put them together. It was a step of generalising, going to a higher level of abstraction, thinking about all the documentation systems out there as being possibly part of a larger imaginary documentation system.”

He would proudly launch the world’s first website and web server on August 6th 1991 – Info.cern.ch ran on a NeXT computer at CERN.

Nearly 20 years later, TimBL let slip ‘the forward-slash forward-slash’ element of typing in a web address was actually completely unnecessary. He could have designed URLs not to need them.

“There you go, it seemed like a good idea at the time,” he told The Times.

Cheers Tim. Still, despite this *slight* annoyance, you’re still an absolute hero to me.

The Internet since those early days has evolved into a completely different beast altogether.

As well as spawning some of the world’s biggest brands (your Googles, and Amazons, and the like) it also put a little known tech company called Cisco on the road to success.

A third of the world’s Internet traffic is now routed through Cisco kit. Now that’s a lovely thought!

If you fancy some perspective on how far we’ve come, take a quick look at some web 1.0 sites. The design is so, so bad.

But, like a delicious fine wine, the web matured (I use the word lightly, of course) and now you get angry when you stumble across a webpage not mobile-optimised. The tragedy!

The rise of social media in the mid to late noughties, combined with the unparalleled rise of the smartphone, has elevated us to a level of personal connectivity never seen before.

And coming up next are ‘things’. No, and that’s not just fridges and fitbits. The Internet of Things, and therefore the Internet of Everything, will come alive when all these different things start speaking to each other in an intelligent way.

By 2020, an estimated 25 billion devices will be connected – and a whole new technological revolution will be in full swing.

Sir TimBL was at the very beginning. He would be a proud man today!