Ahead of the BIG Awards Final on Thursday 22 October, we caught up with the finalists to get to know them a little better. Covering the business stuff all the way through to some more personal details, we’re bringing you a series of blogs. Today we speak to i2i Pipelines… 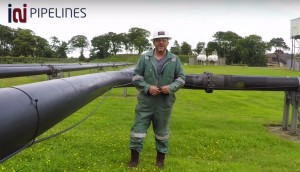 “So we’ve got this really advanced sensor, it’s the size of a sugar packet. And by tying it into the Internet of Things, it’s set to completely transform the oil and gas industry.”

It’s a bold statement from 46 year old, Malawi-born Steve Banks, who has been named as one of our six Cisco BIG Awards finalists, in his role as MD at i2i Pipelines. After spotting an opportunity to insert electro-magnetic sensors into oil and gas pipelines, he realised that valuable data could be collected on the health and integrity of the pipe. This will provide the big operators such as BP and Chevron with the ability to access data in real-time, meaning more efficient and (importantly) safer operations.

“Look at what happened in the Gulf of Mexico in 2010,” he said. “Thousands of barrels of oil were spilt into a marine environment, damage was done. With advanced analytics and predictive maintenance, that situation could have been avoided.”

Beyond the obvious safety benefits, there are other clear advantages of Steve’s brainchild. Current pipeline inspections are incredibly costly and time-consuming. For example, if one of the major operators wants to inspect a pipeline, it’s an extremely complex process. Production has to be stopped while the pipe is cleaned. A sophisticated tool is inserted into the pipe and the inspection is run. This whole process costs around 1-1.5 million dollars and the operator needs to wait a good four to five months for the data to come back.

With Steve’s approach, the sensors are inserted into cleaning tools, known as utility pigs (yes, you read that right: Pigs. This is due to the screaming noise they make inside the pipe). Costing around £50,000 per year, operators can access data at anytime, in real-time. It seems like an easy sell, who wouldn’t want to save millions?

“The challenge is that we’re dealing with a dinosaur of an industry. We’re talking about companies that have been around for a long time, with legacy infrastructures and particular approaches. You come along with a disruptive technology, they turn around and say – ‘but we’ve been doing it this way for 50 years’…”

“There are technical challenges too. We have to make sure the technology works offshore, in extreme conditions. It’s got to be incredibly resilient.”

So what’s been the process to get this idea to market?

“You put in your money and set up your team. Then it’s all about trying to get investment to grow. That’s hard. Venture capitalist firms or individuals – they don’t have to give you the money. I find that it’s about creating a plan that excites them, but is also realistic. And there’s a fine balance between exciting people without overstepping the mark.”

With a plan to raise ten million dollars over the next three years, Steve’s banking on doing just that.

A self-proclaimed ‘ideas guy’, Steve set up the business following an interesting personal journey. He left Malawi to come to school in the UK and joined the Royal Marines immediately upon leaving. After six years in the forces, he moved to oil rigs – working on a variety of roles, from drill floor to pipeline inspection and then subsea operations. All the while he was studying for an Open University degree and then a Masters.

It was during this time that he met his wife, who was working as an instrument engineer at the time. And while her role afforded the luxury of living in staff houses in Petershead, Scotland, he was sleeping in his car on the beach. He’d go running and surfing, and would knock on doors offering a pound in return for the use of a shower. One day she opened her door and the rest, as they say, is history.

Steve’s clearly a physical fellow, with a lust for being active and enjoying the outdoors.

“I’ve always had this thing about building a cabin in the woods, you know?”

So he built that cabin. In Switzerland.

“It took about twelve years, I’d go out for holidays and work on it. It was quite therapeutic. I find that if you don’t get out and do these things, you can easily just end up spending all your time in front of a computer.”

He decided to move into the cabin full-time and lives there today with his wife, two teenage daughters and two younger sons.

But which British inventor would he most like to have a cup of tea with? “John Harrison,” he responds. “The man who invented the marine Chronometer, critical in the development of long-distance sea faring. A carpenter-turned-inventor? The similarities are clear.

When asked who inspires him, it reveals an altruistic nature to his character. He doesn’t refer to an individual person, but the culture of the start-up community in Paolo Alto. There’s a trend for entrepreneurs to set up a business, succeed, sell up and then spend time mentoring other companies. In Steve’s words this is a culture which “permeates from lifestyle into businesses” and he’d like to see filter into tech scenes on other shores.

“It will spread, eventually. It’s a real culture that’s embedded in the whole town/state. That’s what you do. There’s this real kind of goodwill feeling. That’s why so many start-ups have become mentors. I hope that spreads to all towns, I hope people get excited about the idea of helping.”

It transpires that Steve set up his own company training ex-military people to come and work offshore on the oil rigs. And not just that, but the team he employed at i2i had recently been made redundant during the oil industry crisis at the end of 2014. It feels like altruism is in his blood and we wouldn’t be surprised to see him adopt the Paolo Alto mentoring approach in the future.

Best of luck to Steve and all our Cisco BIG finalists who will be battling it out in our grand finale on October 22nd. Watch i2i Pipelines’ video submission the Cisco BIG Finals below.

Do you believe i2i Pipelines has what it takes to win at this year’s BIG Awards? You can cast your vote for the “People’s Choice” award category, so why not vote for them on Twitter or Facebook. Voting closes at midnight on the 21st October!