Ahead of the BIG Awards Final on Thursday 22 October, we caught up with the finalists to get to know them a little better. Covering the business stuff all the way through to some more personal details, we’ve bought you a series of blogs profiling each. See below for our sixth and final interview… 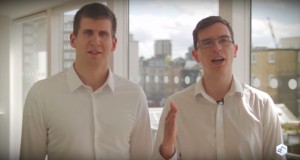 At just 25 years old, Richard Linkesch, CEO of Cambridge-based Internet of Things (IoT) logistics company PalleTech, is the youngest of our six finalists. We’re catching up over an early morning conference call from San Francisco – he’s been busy conducting a series of meetings with investors, and today’s looking like another busy one. But Richard’s more than happy to find the time for us, and he speaks with excitement as he reveals where the seed of the idea was born.

“My parents own a packaging factory in Presov, Slovakia and I used to intern there as a kid,” he recalled. “I quickly became aware that storing transportation pallets was a real issue – as they occupy so much space. In fact, I recall one time when we’d invested in some new machinery, but installing it meant removing 5,000 pallets from the premises.”

This experience stayed with Richard. When he moved to Cambridge to complete a Masters in Engineering he designed a paper pallet, which saved 75% of storage space for his dissertation.

However, when he started to delve into the market, he realised that not only was the margin low, but that infrastructure would need to change and the industry was reluctant to do that. He began discussing the issues with (his now business partner) Anthony Wayman (23), who was exploring big data in the supply chain. Their ideas came together, they decided to join their dissertations and PalleTech was born.

There are 120 billion pallet trips every year, yet 450 billion dollars worth are lost, due to poor cargo visibility. By placing PalleTech’s sensor technology into pallets, cargo operators will have complete visibility of their goods. They can track their assets, secure goods, and protect against theft. There is the potential to roll this out across all industries, but PalleTech is initially targeting the perishable (fresh produce) and high value (pharmaceuticals, automotive, luxury goods) markets.

It’s a neat idea. So how is Richard getting it to market?

“Thanks to various funding projects, like Innovate UK and Accelerate Cambridge, we’ve been able to keep the idea alive. And once we’ve completed our market validation, we’ll do our initial seed round.

“The main challenge is getting people to comprehend the fact that pallets are more than just a piece of wood. This is really ingrained in people’s minds…that pallets are just a dumb piece of wood. We’re transforming that wood and trying to show them that it can actually be a source of supply chain data which can optimise their operations. It’s all about a mind-set shift.”

But Richard has the sense of determination and spirit that you could argue is needed to make this kind of shift. When asked who inspires him, he responds with the American investor Warren Buffet, who is known for his long reputation of smart investing. And why is that?

“I think we have similar world views. He takes undervalued companies and invests in them – and I’ve chosen an undervalued industry to tackle.”

It’s clear that Richard is throwing everything into the venture. And as far as he’s concerned, he has nothing to lose. Quite literally.

“PalleTech takes all of my time. But I’m at a stage of my life when I’m willing to give it everything. When am I supposed to take a risk, if not now? Essentially, I have nothing to lose. I don’t have a family yet, I don’t have commitments. The time for me to take risks is now. And if it doesn’t work out, nothing changes in my life.”

And what if it doesn’t work out?

“Once an entrepreneur, always an entrepreneur. 99.9% of my time is dedicated to PalleTech, and then I explore other business opportunities in that little bit of free time. There are a couple of other ideas.”

When asked what advice he’d give to others thinking about starting up a business, his words of encouragement are simple.

“Just do it. Sounds like a cliché, I know, but just do it! A brick wall is made out of a lot of bricks. If you don’t start building with just one, you won’t make a wall. Start building continually, one by one.”

As part of the BIG Awards initiative, Richard has been paired with a Cisco mentor and is full of praise for the programme.

“My mentor is Panagiotis Kafantaris and he’s absolutely amazing. We speak every fortnight and he’s got so many ideas of how to use and leverage technology. We talk about IoT gateways, fog computing, headless routers…”.

When the time comes to say goodbye I ask Richard what innovation he would personally like to see in the future.

“Apart from smart sensors?” he asks with a smile.

“Underwater cities. That would be cool.”

Best of luck to Richard and all our Cisco BIG finalists who will be battling it out in our grand finale on October 22nd.  Watch PalleTech’s video submission the Cisco BIG Finals.

Do you believe Palletech has what it takes to win at this year’s BIG Awards? You can cast your vote for the “People’s Choice” award category, so why not vote for them on Twitter or Facebook. Voting closes at midnight on the 21st October!