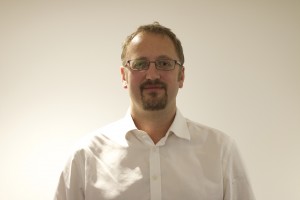 “There are a million and one challenges that a start-up can face, often within a single day,” reflects Bill Clee, founder and CEO of Asset Mapping.

He openly admits being his own boss has been “one of the most challenging experiences” of his life yet at the same time he’s found it incredibly rewarding.

Balancing the running of a burgeoning smart cities start-up while also looking after a young family certainly isn’t for the faint-hearted.

But all that hard work is starting to bear fruit. Asset Mapping – which enables building managers to visualise data on their assets in real-time – has been named as one our six finalists in the Cisco BIG Awards.

In an interview ahead of the final on October 22, Bill says: “You drive yourself very hard.

“There are pressures that come from working very hard for very little. You’re essentially pursuing an idea that may or may not work. It’s extremely risky.

“On the other hand its one of the most rewarding experiences.

“I never set out to become an entrepreneur or a visionary, or whatever you want to call it. It’s one of the things you just fall into. But once you find the thing you love doing, you become driven by it.

“It’s more than just making money, it’s about solving real issues. You don’t get a better feeling when your company starts being recognised.”

It’s a world that Bill is completely absorbed by – often at the expense of other things. He admits to ‘not having a clue’ about recent events in the news (he says the recent Labour leadership election is one that completely bypassed him) and that he can sometimes feel quite isolated in his line of work from everything else going on around him.

However, it’s his family that has helped keep Bill grounded, with two boys keeping him “in his place” at home.

“When the times become tough, or when you have a great success like the BIG Awards it’s great to go home and be able to share that with them.”

The idea for Asset Mapping first came about during the build up to the London 2012 Olympics.

Bill was working on the design work of the security associated with the Games such as the CCTV system at venues, and the perimeter fence.

“As it was such a fast-paced project, as we were creating designs the sign-off period would be very long. It meant the people on-site often had the wrong information.”

Bill realised that it would be more useful for both engineers on-site and the end-client if they were able to visualise the vast amounts of information from a CAD file (which is used in design) on top of a Google Map.

“It meant the engineers and the client seeing what had been installed, in real-time. It was about understanding what information the technicians and engineers wanted to have, and the problems they needed to solve.”

What they were able to create was a simple solution which allowed people on-site to update and input information through a mobile phone.

“To begin with, it was quite revolutionary to be thinking in this way.

“It was trying to solve a real issue within construction, that was helping both the engineer and at the time, the Olympics.

“Technology is a way of solving real world problems. For us there will come a time in the near future where the Internet of Things will just be referred to as ‘the Internet’, and Big Data will just be called ‘data’.

“It’s not like we’re building a new slightly better Facebook. What we’re doing is fundamentally changing the way the built environment will run in the future.”

By his own admission, Bill said, “for a such small company this is extremely ambitious” but this, he argues, is one of the company’s major strengths.

“Being very honest we have our dreams, and we’d love to become a global company really involved at the heart of digitising the built environment.”

For any start-up, getting that early stage support is critical. Bill says he feels ‘very lucky’ to draw on experience from mentors in the form of Andy Mulholland (none other than Capgemini’s former global CTO) and Cisco’s very own Bob Garner.

“It’s allowed me to explore ideas, test them, and also use Andy as a therapist. It’s good to have someone to give you that energy to help you grow as a person.

“The support I’ve had from BIG has been phenomenal.

“Big companies can almost kill you with love, but we’ve found here [Cisco] has been extremely deft in putting us in front of the right people, giving us mentors. It’s helping us explain a complex proposition in a better way.

“A huge proportion of our success has been from people putting in their time and effort.

“It’s been like working with another start-up which has the resources to give you the time and help you need.”

Best of luck to Bill and all our Cisco BIG finalists who will be battling it out in our grand finale on October 22nd.  Watch Asset Mapping’s video submission the Cisco BIG Finals below.

Do you believe Asset Mapping has what it takes to win at this year’s BIG Awards? You can cast your vote for the “People’s Choice” award category, so why not vote for them on Twitter or Facebook. Voting closes at midnight on the 21st October!