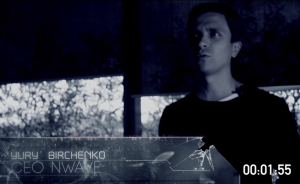 It’s been a whirlwind six months for Yury Birchenko, the founder, CEO, and CTO of Nwave.

As well as the company settling into its new home at IDEALondon, the Internet of Things (IoT) start-up finds itself in the final six of this year’s BIG Awards. During this time, Nwave is going through a rapid growth phase, and 33-year-old Yury is really having to step up to the plate.

“I’ve been doing both roles since April, it’s tearing me apart actually. I don’t see it as sustainable going forward. It’s a great challenge,” he says almost breathlessly.

“As the company develops I’m hoping to focus on my favourite area which is the technology side.”

When the company first started, they set out to solve one of the modern urban human’s greatest challenges – finding a parking space in big cities.

“This problem was killing me!” Yury exclaims.

“So we realised there was no good existing wireless technology which could solve this in a quick, cost-efficient manner.

“We came up with a parking sensor which was able to send data over 7km in an urban environment, which worked for 7 years on just one battery without any replacements or recharging.”

After developing the technology the team realised the potential for connecting other applications and devices up to the web – the very essence of IoT.

These data insights optimise our lives, they make business processes smarter, and it helps make the world greener. It’s this potential that excites Yury and the team immensely.

He points towards a report from McKinsey that predicts IoT will contribute as much as 11 per cent of the world economy by 2025.

“It’s going to be huge. It can’t be developed by just one big organisation. IoT is all about collaboration. It’s not just about pushing from the top, it about connecting different people into one system.

“This is why we want to create the first open standard for IoT in wireless communications.”

Born in Belarus, it would be at the age of 12 years old that Yury got his first taste of being an entrepreneur, in the form of earning “a bit of pocket money” by tutoring some of his classmates in maths and physics.

“I can’t say I’m terribly proud or ashamed of it. I’m not sure it was so good for my classmates at the time!”

He would later study at the Moscow Institute of Physics and Technology – the equivalent of the Massachusetts Institute of Technology for Russia and the surrounding former Soviet states.

This is where he would get his first business experience of serious value after he and his brother came up with a voice over IP application.

“What I learned was you have to scale up really quickly. If we’d had access to finance we could have made a Skype-like application.

“If you just focus on a local market someone else will do it somewhere else on the planet, and you just watch the spaceship take off.”

This was a big learning experience for Yury. However, he looks back on this time philosophically, and he applies a sporting mentality to the life he leads now.

“I like the analogies between sports and start-ups,” he explains.

“In a start-up you are working on being a world champion in solving a particular problem, and there are just a few athletes in the world trying to beat you.

“The winner takes it all. You have to realise you are working towards a gold medal.

“If you look at how gold medal athletes manage their spare time, their lifestyle, you find out that until they win the gold they didn’t have much of a life.

“It’s not a quick sprint. When tackling the problem you see it’s more of a marathon. You have to plan your resources.”

He also draws on inspiration from James Clerk Maxwell – the British inventor who developed the theory to explain electromagnetic waves in 1867. His calculations and equations are still used today.

“To me, Britain means science and invention. Radio is my favourite technology – look at how transformative cellular phones and WiFi have been. It enables so many new business models, and it increases productivity, and efficiency of communications. It’s just massive.”

And of course, Yury and his team find themselves on the forefront of this next technological revolution.

“To reach the BIG Awards Final is a great honour, especially to be one of six of the top start-ups in the country. It speaks for itself.

“Start-ups are all about seeing what’s going to happen in the next two to three years.

“Cisco spends a lot of effort in understanding the future. Being able to share our views about the future of wireless connectivity with one of the leading industry experts is a nice thing to have. It’s absolutely invaluable.”

Best of luck to Yury and all our Cisco BIG finalists who will be battling it out in our grand finale on October 22nd. Watch Nwave’s video submission the Cisco BIG Finals below.

Do you believe NWAVE has what it takes to win at this year’s BIG Awards? You can cast your vote for the “People’s Choice” award category, so why not vote for them on Twitter or Facebook. Voting closes at midnight on the 21st October! 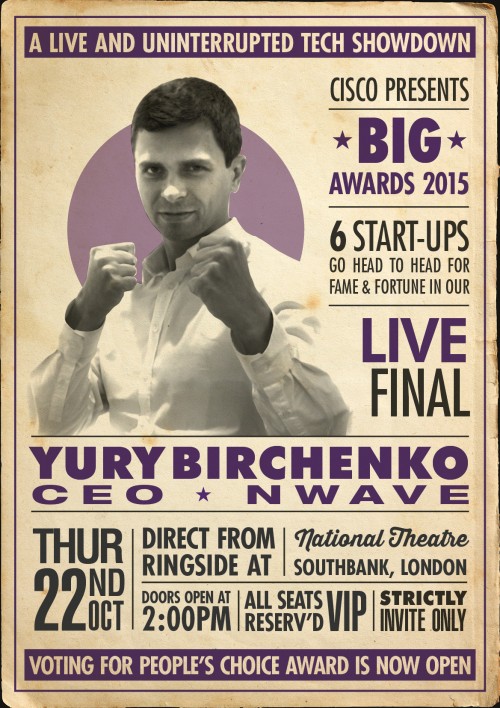